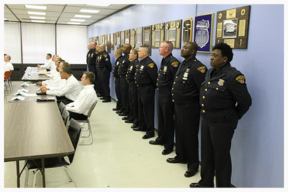 HISTORY OF THE CPPA
Like much of the progress obtained in policing in America, the Cleveland Police Patrolmen's Association was born out of the most tragic day in the history of the Cleveland Police Department. On July 23, 1968, in the Glenville Section of the city, rioting militants murdered three of our own, and a fourth officer died years later as result of his injuries inflicted that day. While there was no shortage of valor, courage and relentless spirit among the officers that finally brought calm back to the city that day, there was an obvious shortage of necessary equipment which could have saved the lives of police officers as well as the brave civilians who attempted to save them.

Under the guidance and assistance of the Boston Police Patrolmen's Association, the CPPA was formed in January, 1969 and became the labor union for all non-supervisory Patrol Officers. Prior to the formation of our Association, our officers took their chances in Cuyahoga County Common Pleas Court to address any grievances. Through successful labor contracts, work hours, sick and vacation time off, and worker rights quickly replaced blanket mistreatment of patrol officers. Out of the tragedy of the Glenville Riots and due to the loud voices of the survivors who fought that day, street officers were soon issued portable radios which enabled citywide communications. Also, the fist Tactical Unit was formed, which trained and equipped specific officers to respond to especially dangerous situations such as riots and barricaded suspects. This valuable unit later became the modern day Special Weapons and Tactics Unit, or SWAT.

WHAT IS THE CPPA ?

The 1450 member CPPA serves as the bargaining unit for all non-supervisory Patrol Officers, Detectives, and Radio Dispatchers of the Cleveland Police Department assuring representation for the safety of our force.  The CPPA, formed in January, 1969 continues today to represent and constantly review of the needs of our members. 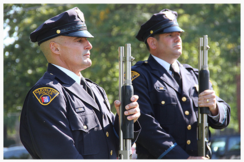 MISSION OF THE CPPA

The Association was formed in 1969 to provide mutual aid and protection, to provide for the general welfare of our members, and for the betterment of all Patrol Officers, their families, and members of this community. Our commitment and purpose is the continuance and furtherance of our pledge to strengthen and unite our members in our struggles to protect our rights and achieve our goals.

The Association, Board of Directors, and Executive Board shall also:

Undertake to increase the professional status of all members, by engaging in educational programs and classes, public forums, the issuance of publications, enhancing community relations and all other things necessary to meet the increased responsibilities of police in today's society.
Undertake the relief of distressed members, their widows, and orphans, and promote the general welfare of the orphans and needy of Greater Cleveland.
Ensure that sound business practices are enacted and preserved; that all holdings and assets of the Association are protected against theft, fraud, and mismanagement; and that efficient and cost effective operations are adopted and practiced on a day to day basis.